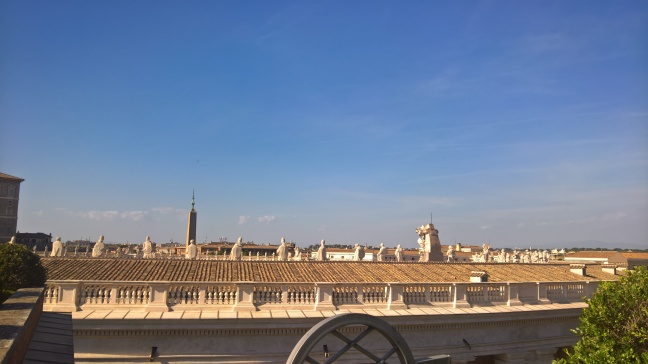 For more information about the Polyanno project go to this bit of my website here.

The International Image Interoperability Framework (IIIF) annual conference was held this year in the Vatican and I was lucky enough to be able to go with the Polyanno project 7th to 9th June 2017, presenting in the afternoon of the Wednesday. The conference was held in the Institutum Patristicum Augustinianum just off the side of San Pietro Piaza and it was a stunning choice of venue and location.

However nothing is quite perfect and the poor WiFi was a recurring problem coupled with, to everyone’s surprise, blackouts. Whilst most were just brief moments of power cuts there was a much longer one that completely disrupted the lightning talks not longer after I had presented, plunging the main lecture theatre in pitch black and resulting in an early coffee-free coffee break (the catering were wonderful throughout though). We were informed afterwards that these were a result not of the Vatican City but the Italian services disrupting the power supply into the little country!

The talks, workshops, and discussions were of a consistently high level of quality and I would encourage anyone with an interest in the IIIF community to check out the slides uploaded on the Google drive here  – https://drive.google.com/drive/folders/0B8biwZuDijgeZ2lnLWNJc2Z0RFU .

After deliberation I had chosen to submit a proposal for a lightning talk followed by a demo session in the afternoon on the basis that I could allow others to talk about the components of the project most relevant to them. Of course lightning talks do not allow for much time so after several iterations I ended up removing the short demonstrating GIF animations I originally put in and replacing them with just a simple overview statements of the main topics and problems I felt I was addressing – a good decision I think in the end.

You can see the slides on Slideshare, although it’s worth noting that the animations are lost in this upload so there is some information buried under layers.

The power cut moving the coffee break to earlier, and the dodgy WiFi made the demo session an interesting one, although thankfully not just for me but everyone else too, as half our applications were struggling to reach the necessary APIs to demo and it all felt a little rushed as we were walking into the classrooms alongside our audience and plugging in laptop to demo whilst they were already there and asking questions. In spite of this though I felt like it was still productive and started several interesting and useful discussions. The crowd that started in the main lecture theatre didn’t end until the end of the day and even then I felt like there were so many people who had got a chance to ask to talk properly later, and this level of interest in the project is fantastic!

The main points for development of Polyanno that I gained from this week were:

The diversity of talks, discussions, and workshops going on over the week was phenomenal and I don’t think I had quite comprehended the range or types of applications of IIIF, nor the issues that the framework impacted on or was affected by. However of course several recurring themes or important points emerged over them that I think it’s worth grouping together:

Confusion Between IIIF and the Viewers

I found this more when talking to people one on one in the coffee breaks, or during the discussions, as opposed to being a theme present in the talks given. A surprising number of people were unable to distinguish between features that were features of IIIF APIs, that is things defined in the the standards, and features that were specific to the viewers that people were using to implement those APIs. For example, people complaining that some things were “currently impossible in IIIF” just because they couldn’t do it in Mirador but were perfectly possible in other viewers such as Leaflet-IIIF. I wish I had actually kept note of the particular things as it probably would have been quite useful to feedback to the community and I am discovering that when writing this right now I cannot recall exactly what some of the things were.

I can definitely understand why this comes about, and how hard it can be sometimes when debugging to try and figure out which layer the fault may lie in, but equally this is something that could be improved by perhaps improving the IIIF documentation to make it more clear that there are a growing number of different viewers out there, with different features and that perhaps more thought should be given as to the most relevant choice as some of these complaints I think originate from people talking as if the viewers were identical, completely restricted and fully defined by IIIF. This kind of viewpoint could be acting as a deterrent for potential adopters who think they will be so restricted, as well as severely limiting the creativity and potential of the current adopters.

The Complex Relationships Between IIIF, Images, and Annotations

This was probably my biggest surprises was realising how many people struggled to understand the relationship between IIIF, images, and their annotations. I think because of the increasing frequency of applications tying in annotations alongside their IIIF usage, combined with the misunderstandings about IIIF and its viewers, and finally the incorporation of metadata standards in IIIF, many people appeared to believe that annotations were stored, or at least their formats defined, within the IIIF framework.

This is something I hope to expand upon in a later dedicated article, as I hope to able to feedback into the community a slightly better understanding of this (although I do not pretend to be an expert on this matter!). However I feel I should at least briefly try and clarify things here:

IIIF defines the JSON format for sharing the images, or collections (“manifests”) combined with some, mostly optional, metadata fields.

The W3C Web Annotation Model (WAM) is the standard being developed elsewhere to define the format for defining and sharing annotations, such as transcriptions.

Some IIIF viewers, such as Mirador, allow users to make annotations of their IIIF images but they are not storing all that information in the one IIIF file. At least they shouldn’t be.

With examples such as the JSON-LD method used by Polyanno, you can define multiple “bodies” and “targets” in one annotation file which allows you do things like point to different versions of a transcription, e.g. a plaintext file and a marked up file, and point to different versions of the target, e.g. the IIIF URL for the image a whole and the IIIF URL for just the region of the image containing the transcribed text.

There are blurred lines still because you can store more generic metadata such “labels” and “descriptions” within the IIIF file but also independently using the Web Annotation Model framework. Additionally I understand the pain of making multiple calls to the separate files of the WAM as opposed to keeping all the information inside the IIIF file. However I believe it is inappropriate for people calling to add more detailed annotation fields like “transcriptions” inside IIIF JSON files, or even worse storing their transcriptions solely within the “description” fields of the IIIF.

Factors such as the larger scales and encoded metadata relationships make IIIF fantastic to underly some fantastic image analysis, and although I did not get as much time to explore this as it was less relevant to Polyanno than other coinciding topics, I was impressed and excited by some of the work going on here as well as the potential going forward.

There was a lot of discussions around the AV updates to IIIF, but also within images expanding to 3D as well. Due to changes of schedule I missed both the Book of Fame session, and a later 3D and IIIF session running on the Thursday but I had a fantastic conversation with on of the Book of Fame gang (with demo!) in one of the coffee breaks about both the implementation and applications of 3D implementation of the 2D IIIF images!

I enjoyed learning over lunch on the Thursday about a current application of IIIF to displaying and analysing the results of a type of microscopy (I confess I was partially eavesdropping so didn’t quite catch the full information) for medical purposes, and there was generally a lot of hype and excitement for IIIF in scientific applications under development or discussion.

Similarly the aforementioned Book of Fame chat highlighted the potential for IIIF in gaming and gamification, something that had also been more lightly referenced in Cogapp’s lightning talk on “Fun With IIIF” earlier, and a topic of great interest to me because of the potential for the Polyanno project and its applications to the University of Edinburgh Collections.

Fantastic chat with @realbookoffame in the coffee break about possible applications/relationships between #IIIF, #gaming & #gamification

This was a topic I mention myself in my Polyanno talk as an issue I had discovered during my own research – that a lot of the community focus on building their application UI or designs with little or no market research and no acknowledgement of their target audience. Consequently many build Business to Business (B2B) products for niche scholars or librarians or developers, but then simply reuse or treat them as Business to Consumer (B2C) and expect crowd sourcing users, or visitors to their collection sites, or news updates, or students online to use them.

I was delighted to see Julien Ramy’s talk and research examining quantitatively the usability of the Mirador and Universal Viewer for basic IIIF viewing but this is still such a tiny section of the applications and issues that need to be better understood and addressed.

This article has been my own personal interpretation of the week, and I’m sure I’ll learn even more from other’s perspectives during the joint debriefing session of the event that’s been planned with the University of Edinburgh and the National Library of Scotland but I felt like I had to get everything down here while it was still fresh (and I could find all the tweets while they were more recent).

Thanks to the IIIF community for making it such an enjoyable and informative experience!

The Friday afternoon group at the 2017 #IIIF Conference in Vatican City pic.twitter.com/SGnoCL02BV

For more information about the Polyanno project go to this bit of my website here.