“Space,” it says, “is big. Really big. You just won’t believe how vastly, hugely, mindbogglingly big it is. I mean, you may think it’s a long way down the road to the chemist’s, but that’s just peanuts to space, listen…” – Hitchhiker’s Guide to the Galaxy, Douglas Adams 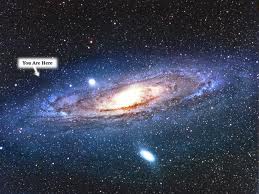 One of the things that has long fascinated mankind about space is it’s size. It’s the sense of perspective that we cannot have no matter how hard we try, to take in the sheer scales of the universe and how ridiculously tiny we are in it.

This post is about just a few of the ways in which we have had a go.

To begin with there have been many who have written about the sizes in statistics. According to Wikipedia, if the disc of the Milky Way was 100m in diameter, the Solar System, would be no more than 1mm wide in width, about the size of a grain of sand and apparently a super computer recently estimated there to be approximately 500 billion galaxies in the universe. Yeah.

So numbers often mean very little to most people, they’re just numbers and especially difficult ones to visualise. Therefore, lots of infographics and videos have been made, both in 2D and 3D, to try and make this easier to understand: 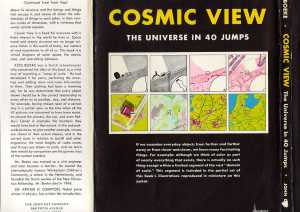 The first attempt at this was in 1957 when Kees Boeke published “Cosmic View, The Universe in 40 Jumps” in which he tried to give children a sense of magnitude going up in powers of 10. More recently there’s been a new 3D map been made using data from the Sloan Digital Sky Survey and some 2D images set to techno music are popular on Youtube.

But these things still leave it as a very abstract idea, giving you some proportions that are difficult to connect with the real, massive, whole picture that has you somewhere in it, reading this article. 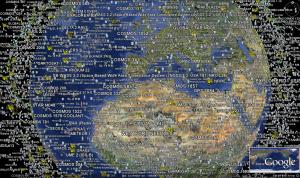 For most, exploring space and scale is done through Google Earth since its introduction of the “Sky” feature in . If you haven’t already you can download this here at and have fun scrolling in and out our corner of the galaxy at your whim! Unfortunately though, without a guide most people are inclined to random, aimless zooming that actually doesn’t contribute a lot to your understanding of anything.

Scale Of The Universe

However, there is a Flash animation invented by 2 teenagers that has gone viral because of it’s ease of use to scale in and out of everything and is “packed with information”. Watch the video of it, play with it and enjoy viewing sizes of various objects big and small with you somewhere in between. 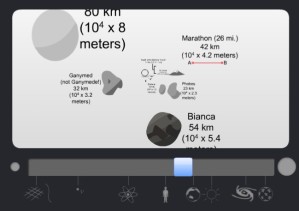 While you’re on the scale website, view the link to the brilliant video made by the unusual collaboration of the Eames design office and IBM, called “Powers of Ten” that was made to try and give the sense of perspective in 1968. It should be noted that we have discovered a lot more at both ends of the scales since then!

But of course, to appreciate the universe properly the distances between objects needs to be understood and zooming in and out of sizes doesn’t help with that.

Firstly, there is this website that has made the solar system on an infographic to scale, requiring you to scroll to the right along it.

Or, alternatively you can travel away from our Sun using OMG Space which is a similar downwards scrolling graphic. This includes a background of other stars and galaxies so it is very difficult to find the planets without using the links at the bottom of the page which scroll quickly for you so you lose some of the feel for the distances but gain more of a connection with the context in space. 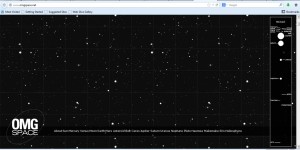 Then there’s Distance to Mars which actually only covers the tiny portion of space between us and the planet Mars but it does this by travelling there, not just by zooming and scrolling, filling in the missing bit of the picture by letting you know about the velocity and time taken.

This still might not mean much on its own, but after doing this go back to all the bigger scales and just start trying to connect that little path through space with the rest of it. Imagine travelling further and faster and how long it would take you just on a computer screen alone.

Understanding the enormity of it all yet?

” “Have some sense of proportion!” she would say, sometimes as often as thirty-eight times in a single day.
And so he built the Total Perspective Vortex — just to show her.
And into one end he plugged the whole of reality as extrapolated from a piece of fairy cake, and into the other end he plugged his wife: so that when he turned it on she saw in one instant the whole infinity of creation and herself in relation to it.
To Trin Tragula’s horror, the shock completely annihilated her brain; but to his satisfaction he realized that he had proved conclusively that if life is going to exist in a Universe of this size, then the one thing it cannot afford to have is a sense of proportion. ”

Douglas Adams knew how wearying it can be seeing your place in the world but don’t panic! When you’ve finished travelling through magnitudes through the depths of space, I’ve got some Monty Python here to cheer you up…