Okay so are actually also a lot of things that we can actually build that we used to portray in fiction in general popular culture that for a very long time we would laugh at and secretly wish we could actually build and own for ourselves. Actually thanks to a combination of lots of clever engineers acting upon those wishes and also just people generally making really cool things or testing really cool classic things we can, or at least know we can, build working versions of the following things: 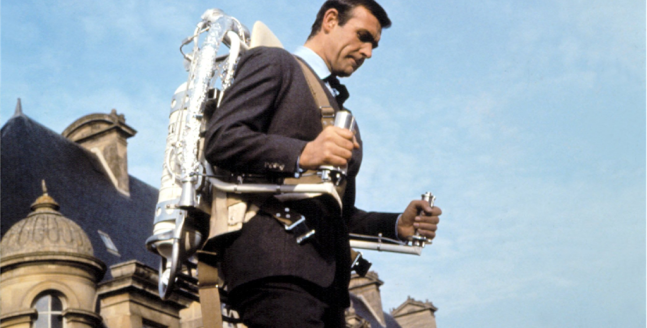 Not only do they exist but there are companies like The Martin Jetpack Company trying to make them practical and more affordable.

This wonderful version of the 1830 Jupe Expanding Table Design –

The company Terrafugia hit the headlines in 2013 with their designs for a working flying car. They had already made a street legal car that with a bit of manual checks first transform into a working plane and they hope that their next design will also become affordable so that soon everyone can have one.

The software developer Spritz have released their new app to be sued in conjunction with wearable technology that allows to read and absorb information at ridiculous speeds by adjusting the format of the text so that it identifies and highlights the Optimal Recognition Point (ORP) of words – the part of the word that our brain uses to decipher the rest of it.

Lots of people are aware then we can make humanoid robots but do they know that there are large humanoid robots in development capable of assisting humans in disasters such as at the DARPA Robotics challenge or that a Chinese inventor spent at least a year of his life building a functional giant humanoid robot just because he wanted to?

Not only are little stationary holograms possible like those you can make with the Science Museum kit with the curved mirrors, but live action, full size dynamic ones are working and awesome. And they’ve been used to let the dead perform again.